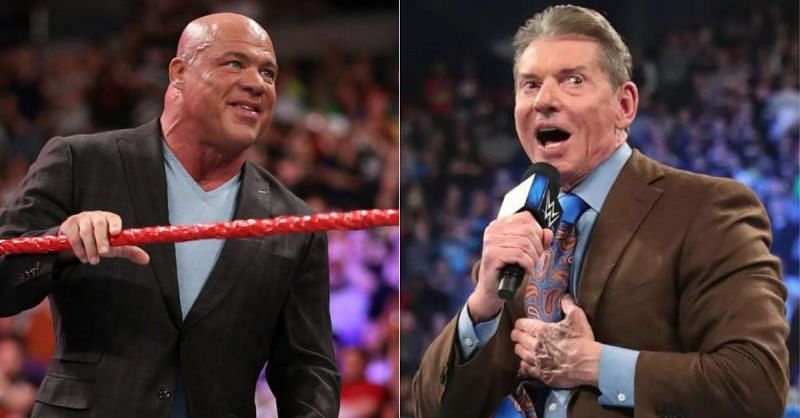 Kurt Angle, in a recent interview, said that WWE Chairman Vince McMahon threatened to fire the WWE crew if they laughed during segments featuring Kurt Angle and Vince McMahon.Pat McAfee asked Kurt Angle about his favorite memory during his time spent in professional wrestling. Angle stated that his first year in WWE was his favorite, especially his skits with Stone Cold Steve Austin. The Hall of Famer said that the crew would laugh during the pre-takes which Vince McMahon told them not to do.”My first year was my favorite year and it had a lot to do with working with The Rock and Stone Cold, Undertaker. But our skits with Stone Cold were just priceless. You know, we had great chemistry and I’m not afraid to make an ass out of myself. So I was kind of like the idiot, following Stone Cold around and it worked out really well. I don’t think even Vince McMahon thought we’d have that chemistry. The crazy thing is when we were shooting the pre-tapes, Vince would say, ‘hey, if anybody laughs while we do this, you’re fired.’ Because people were laughing before the pre-tape was finished. He was like, ‘no more laughing, we can laugh afterwards.’ We would do the pre-tape and everybody would keep a straight face and afterward everybody would be on the floor laughing. It was just hilarious.” Kurt Angle on his chemistry with Stone Cold Steve Austin Stone Cold Steve Austin and Kurt AngleKurt Angle revealed in the same interview about his great chemistry with Stone Cold Steve Austin and how none of it was scripted.”Some of the stuff that came out of Austin’s mouth and my mouth, it wasn’t scripted. There was an idea of what we wanted to do, and Vince told us, explained us what we wanted to talk about. There wasn’t any real scripts, just back-and-forth content. I just had incredible chemistry with Austin and McMahon.”Kurt Angle made a big name for himself in the Attitude Era not just for his in-ring ability, but also for his backstage segments and promos in WWE.