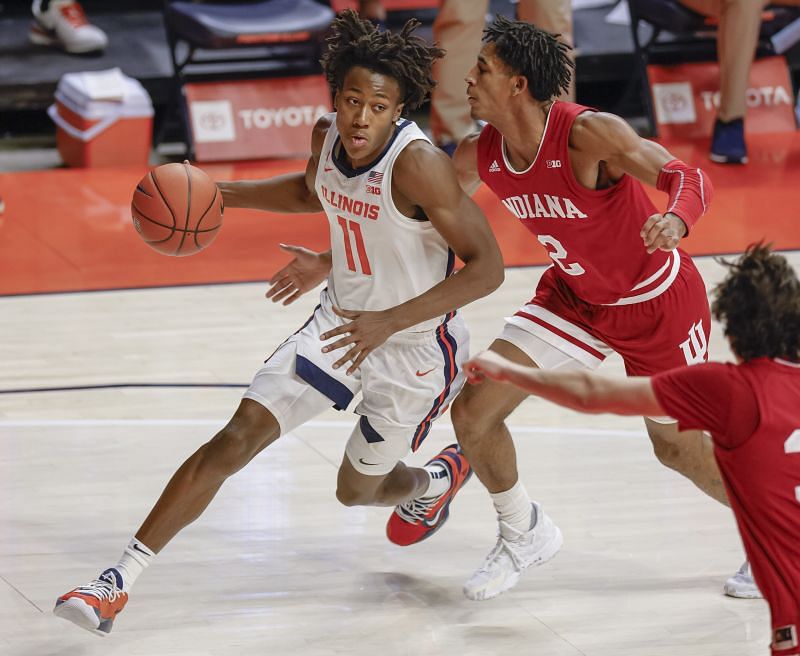 Wooden Award 2020-21 nominee Ayo Dosunmu scored 31 points to give Illinois Fighter Illini (14-5, 10-3 Big 10) the win against Nebraska on Saturday. With that, the team is now on a 5-game winning streak and places No. 2 in Big 10 standings.Illinois will look to continue their dominant season in their fight against the Northwestern Wildcats (6-12, 3-11 Big 10) on Monday.Northwestern will look for an upset win when they step on the court to face one of the best teams in the nation. Meanwhile, Coach Chris Collins’ team dropped their 11th straight game on Saturday, suffering a heart-wrenching 64-50 loss against Rutgers.Northwestern Wildcats PreviewNorthwestern will need to be on their A-game when they face an Illinois team that beat them comprehensively the last time the two teams played this year.Their 81-56 loss to Illinois on Jan. 7 showed the team had no answer on how to stop them.Northwestern ranks second-to-last in Big 10 standings, sitting just above Nebraska by one game. The team holds a conference record of 3-11, and they will really need to toughen up when they play arguably the best team in the conference.Key Player – Chase Audige

Audige serves as the team’s leading scorer, averaging 12.8 points for the season. The sophomore guard only scored 11 points in the team’s loss to the Rutgers, but put up 19 points against Indiana and 18 against No. 24 Purdue.If Northwestern wants to keep up with Illinois, Audige must step up offensively, and defensively, when he matches up against Ayo Dosunmu on Monday.Illinois Fighting Illini PreviewThe team just continues to amaze us throughout the season. Just when we thought the team had been in a slump at one point, Illinois squashed those notions, immediately.Illinois is led by tandem Ayo Dosunmu and Kofi Cockburn, both Wooden Award Candidates, as the two have been outstanding for the team all season. Cockburn dominated against Northwestern in their last meeting, as the center scored 18 points and snatched 12 boards for a double-double. He also had 21 points in the game against Nebraska.

Kofi Cockburn ranks second in the NCAA with 14 double-doubles this season, behind only Austin Peay’s Terry Taylor with 15. Cockburn has posted double-doubles in 11 of 13 Big Ten games. https://t.co/wHwBd3mmNT— Illini Stats & Notes (@IlliniStats) February 13, 2021Brad Underwood’s team is one of the top teams in college basketball and will continue their Big 10 surge when they look to dominate against Northwestern.Key Player – Ayo DosunmuDosunmu dominated the team’s recent win against Nebraska. The junior guard is averaging 21.7 points, 6.2 rebounds, and 5.1 assists for the season.He is elite when he gets in rhythm and utilizes his all-around game on the offensive end. The guard came up big in the overtime win against Nebraska, scoring 22 points in the second half, 10 points in regulation, and the first 5 points in overtime.Illinois vs Northwestern PredictionExpect this game to end in a blow-out win for Illinois. With the way Illinois’ entire starting line-up and reserves have progressed, Northwestern might have to brace themselves for the worst.When Illinois defeated Northwestern on Jan. 7, the team was at their breaking point in winning six of their last 8 before that. But now that this team has reached their breaking point, Illinois could see their dominance against Northwestern as soon as the game tips off.Where to watch the game ?The game will be broadcast on the Big 10 Network.
Published 15 Feb 2021, 05:45 IST